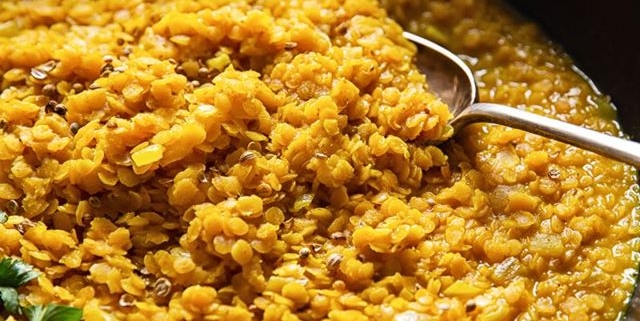 Lentils are to India what meatloaf is to America – Maybe that is why heart disease is an epidemic in the United States and practically unheard of in India…..

Ranging from yellow and red to deep black, these tiny disc-shaped members of the legume family are eaten in some form at least twice a day in “any self-respecting Indian household,” says Kavita Mehta, founder of the Web-based Indian Foods Co. In fact, India is the world’s biggest producer and consumer of lentils. Known as dal, lentils typically are served at every meal with steamed rice or bread.

This superfood gives you protein and cholesterol-lowering soluble fiber, as well as about twice as much iron as other legumes. And lentils are higher in most B vitamins and folate, which is especially important for women of childbearing age because folate reduces the risk of birth defects. Plus, U.S. Department of Agriculture researchers discovered that the pigment in Beluga black lentils acts like an antioxidant and helps protect against heart disease, cancer, and the aging process in general. Not too shabby for something the size of a pencil eraser.

What is in lentils that make it a superfood? Just imagine that lentils lack only 2 essential amino acids in order to complete the 20 amino acids that we need in our body. Lentils are low in fat, high in fiber, and low in calories (230 calories for a cup of cooked lentils) which are the best option for dieters. The lentil seeds can aid the digestion process and stabilize the blood sugar for its potential to lower the glycemic index and prevents blood sugar to rise rapidly after eating.

In addition, lentils are also rich in thiamin or vitamin B1, high in folate content or vitamin B6, loaded with minerals such as magnesium, calcium, manganese, phosphorus, and iron.

Take note that magnesium, the natural calcium channel blocker, has an essential role to keep our heart healthy. Enough supply of magnesium can relax the arteries, lessen resistance, and tremendously improves the oxygen, blood flow, and nutrients. Likewise, lentils are an energy booster and can replenish iron stores. Some people regarded lentils as the best alternative to iron meat because of its low calories and fat content.

Lastly, the high amount of tryptophan, a kind of amino acid can help to produce protein when combining with other amino acids. This tryptophan is known for anti-depression and can induce good sleep because it serves as a precursor for melatonin and serotonin of the brain. Another significant compound found in lentils is called molybdenum which function is to catalyze important chemical reactions in metabolism.

Lentils can be stored a long time, they are easy to make, and they are one of the cheapest protein sources going, at just $2.00 per pound. And unlike other legumes, you don’t have to soak them before cooking. Just rinse them in cold water and simmer in water or vegetable broth. Enjoy them plain or spiced with herbs, onions, or garlic. I simmer them with quinoa and buckwheat as the take the same time to prepare, 15 minutes.

I add a half a cup of lentils with a half a cup of either quinoa or buckwheat. You put the cup of lentils/quinoa in a pot and add two cups of water. Bring to a boil and simmer for fifteen minutes. I let stand for another ten or fifteen minutes and then place in a bowl and add chopped organic tomatoes, parsley, and a little fresh organic chopped onions. Top off with fresh squeezed organic lemon and a half of an avocado. This is a perfect meal of protein, calcium, antioxidants, enzymes, fiber, fat and tons of vitamins…..

For buckwheat, add three cups of water to the one cup of buckwheat and lentils. Thanks you Doug for the info veganhurt …