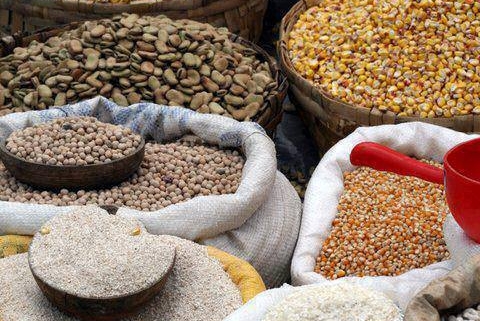 Thanks to a relentless campaign from food industries, we have a highly exaggerated idea of the amount of protein that is needed by our bodies. In fact, we only need a small percentage of the amount we usually get. If you staunchly refuse to believe this statement, consider mother’s milk, which contains only 1.6 grams of protein per 1/2 cup, less than one half the protein of cow’s milk. The greatest growth time of our lives is when we are babies, so if we needed huge amounts of protein wouldn’t mother’s milk, the “perfect food”, provide it?

In fact, there are serious dangers to high protein diets. Two examples are: osteoporosis and kidney disease. The bone thinning disease of osteoporosis is an epidemic in the United States and high amount of protein have unquestionably played a huge part in this explosion. High protein diets cause calcium to be lost in the urine. This calcium does not come from the meat – it comes from our bones. Animal products create uric acid which makes our blood acidic. Calcium is the mineral that is most needed by the body to fight acidity – and in its valiant attempt to protect itself, the body pulls this needed calcium from the bones, the most abundant source we have.

Further, if we eat more protein than the human body can use, it is broken down and excreted which overworks the kidneys by increasing the amount and flow of urine. The “nephrons”, which are the kidneys filter units, gradually die off in the process.

So, yes, we need protein – but not a huge amount of it and the best advice is to stick to plants. A variety of plant foods provides all the protein we need and, contrary to a popular myth, we don’t need to ‘combine’ those proteins in any special way to get all eight amino acids that the body doesn’t produce. That notion began with an influential book, Diet For A Small Planet. The author, Frances Moore Lappe, later recanted, admitting she was in error. If only all errors were so readily admitted!

There are two kinds of fiber. The first is “insoluble” fiber, alias ‘roughage’, which can’t be used by the human body. Instead it moves on through, carrying out waste products and toxins. The more insoluble fiber we have, the less likely we are to retain foods inside our bodies which keeps them from putrefying. Yes, that’s a gross thought but that doesn’t make it any less true.

“Soluble” fiber becomes gooey and helps to process fats, lowers cholesterol and slows the release of carbohydrates into the bloodstream. Many have reported a lower cholesterol score just from consuming more fiber.

Quite simply, fiber is what makes you feel full! Obviously, if we feel full we will eat less and be more satisfied, our appetite will be more easily controlled and we will either lose weight or maintain a healthy weight.

The most popular theory of dieting and weight loss for decades has revolved around calories. Experts have loudly proclaimed that there is an immutable formula for calories in, calories out but, in fact, all calories are not the same because some calories require much more digestion than others. The harder your body has to work to digest those calories, the less of them will be absorbed.

The difference between a spoonful of sugar and a spoonful of beans is startling. In fact, if you’d like to reduce your calorie “price” by 10%, add an extra 14 grams of fiber. This means that if you eat 2,000 calories per day, and add 28 grams of fiber to your meals, those calories will only “count” as 1600. Cool!

… and in that order, with beans being the best source of fiber. Set a target of at least 40 grams per day. Beans have approximately 15 grams of fiber per cup.

Scientists rate how quickly foods release their natural sugars into the bloodstream using a number called the glycemic index or GI. Foods on the low end of the glycemic scale release their natural sugars slowly over a period of time. Probably most resident in the western world have experienced the famous ‘sugar high’ and researchers are positive that sugar – literally – acts like a drug on the human system. In fact, some scientists have compared sugar to heroin!

Low glycemic foods, on the other hand, release their sugars more slowly and steadily, acting a constant source of energy. These foods don’t send your blood sugar skyrocketing only to crash soon after, causing your appetite to return and often making snacks irresistible.

And, if you’re overweight, your body tissues are most likely more sensitive to insulin, the hormone that controls your blood sugar.

What makes a food low or high on the glycemic scale? It’s about the carbohydrate molecules of the substance. With low-GI food, the molecules are stacked and dense and have been compared to a stack of logs waiting to be burned in the winter fireplace. When the agents of digestion in your body – your enzymes – go to work on these logs, it takes a long time to burn them and that’s why your blood sugar isn’t much affected.

High GI carbs are more like branches or twigs, with their molecules spread apart and surrounded by space. Your enzymes quickly break them apart, releasing all their sugar into the blood at more or less the same time.

A few years ago, it was discovered that a hormone named “leptin” [its name comes from the Greek word ‘leptos’ which means ‘thin’] controlled the human appetite. There was an incredible excitement over this discovery and the dieting world hailed The Answer for all overweight folks. Unfortunately, leptin from outside sources has thus far been a huge flop.

Leptin is made by our body’s fat cells. When the cells realize there is enough nourishment available, [meaning you’re not starving yourself by dieting!] they release leptin into the bloodstream which has two important effects:

* Your metabolism is boosted and thus calories are consumed more quickly …

Plant based, low-fat foods help to keep leptin levels high – while fatty foods, like animal products, suppress your leptin supply. And guess what? Beans are only 2-3% fat which means they raise your leptin levels and reduce appetite, while causing your metabolism to work harder and faster.

Beans are loaded with nutrients that our bodies crave:

B Vitamins: are necessary for healthy brain and nerve cells, for normal functioning of the skin, nerves and digestive system.

Calcium: for strong bones and teeth and to help keep the body more alkaline, rather than acidic.

Folate: a B vitamin that our bodies don’t produce yet dry beans are our single best source of this important vitamin which helps protect against heart disease and cancer.

Beans are cheap! In fact, there is nothing, absolutely nothing, in the grocery store that is a bigger bargain than beans, peas and lentils. Yesterday I bought an entire pound of black eyed peas for $1.29. Granted, I normally pay more than that because I almost always buy organic beans. But even those babies are only about double the price of the ones grown with chemicals. Considering their nutritional punch, there simply is nothing in the store that is a better buy than beans.

Check out the dried beans and lentils in your store and see for yourself. And if you can buy them in bulk, the way I do, they’re even cheaper. Compare the cost of beans with meat. Meat cost many more times that of beans and don’t forget about the repercussions of meat on your health. You will be paying for major health issues and prescription drugs, where beans enhance your health and cut the risk of all the disease that meat and milk are responsible for.