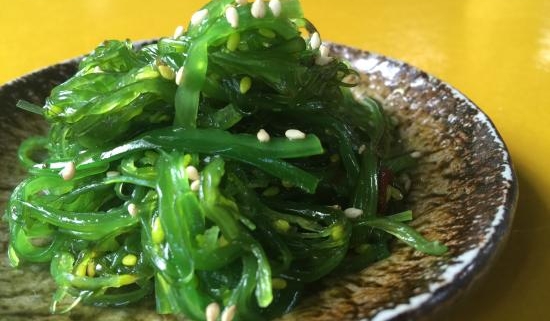 I used to think of seaweed as just a beneficial whole-food source of minerals like iodine, for which it is the most concentrated dietary source. Indeed, just a daily half-teaspoon of mild seaweeds, like arame or dulse, or two sheets of nori should net you all the iodine you need for the day. But, the intake of seaweeds is advised not only as a whole-food source of iodine but also, evidently, “for the prevention of lifestyle-related diseases, including cancer, cardiovascular and cerebrovascular disease….” Based on what?

Wakame Seaweed Salad May Lower Blood Pressure, the reasoning is that the Japanese live long and eat seaweed, so there is speculation that seaweed might have “influence on life expectancy,” based on suggestive reports. But when we see long lists of the supposed benefits a particular food is purported to have, such as “compounds found in [seaweed] have various biological activities including anticoagulant, anti-viral, antioxidant, anti-allergic, anti-cancer, anti-inflammatory, anti-obesity, and neuroprotective properties,” we need to know if they are based on clinical data, meaning studies with actual people, or so-called preclinical data, that is, from test tubes and lab animals. I mean, what are we supposed to do with a study talking about the effects of “seaweed-restructured pork diets” on rats? Those researchers tried to use seaweed, as well as other ingredients, to “improv[e] the ‘image’ of meat product.” Researchers also tried to add grape seeds to meat, they tried flaxseeds, they tried walnuts, they tried purple rice, and they even tried “thong-weed.”
When you look at epidemiological studies, where you compare the diets and disease rates within a population, you see that Japanese pre-schoolers who eat seaweed tend to have lower blood pressures, suggesting “seaweed might have beneficial effects on blood pressure among children.” That could make sense given all the minerals and fiber in seaweed, but cause and effect can’t be proven with this kind of study. Perhaps other components of the diet that went along with seaweed eating that made the difference.

It’s even harder to do these kinds of studies on adults, since so many people are on high blood pressure medications. University of Tokyo researchers took an innovative approach by comparing the diets of people on different intensities of medication: low-dose of a single blood pressure drug, high-dose of a single drug, and multiple drugs. And, although they all had artificially normalized blood pressure “as a result of effective medication,” those who ate the most fruits and sea vegetables tended to be the ones on the lower dose of a single drug, supporting a dietary role for seaweed. An interesting finding, but why not just put it to the test?
A double-blind, crossover trial found that seaweed fiber lowered blood pressure, apparently by pulling sodium out of the system. Real seaweed couldn’t be used in the study, because the subjects wouldn’t be able to be fooled with a placebo, but why not just put whole powdered seaweed into pills? That was finally attempted ten years later. Compared to doing nothing, subjects receiving a daily dose of dried wakame powder in capsules had beautiful drops in blood pressure. The researchers, however, desalinized the seaweed, taking out about two-thirds of the sodium naturally found in it. So, we still don’t know if eating seaweed salad is actually going to help with blood pressure. What we need is a randomized, controlled trial with plain, straight seaweed. No one had ever done that research, until…they did!

Six grams of wakame, with all of its natural sodium, led to a significant drop in blood pressure, especially in those who started out with high pressure. The subjects experienced only minor side effects and ones that could be expected with increasing fiber intake. A nice thing about whole-food, plant-based interventions is that we sometimes get good side effects, such as the resolution of gastritis (stomach inflammation) some subject had been having, as well as the disappearance of chronic headaches.

I’m also a fan of these Certified Organic Raw Nori Sheets, which are dried at under 85 degrees and tested daily for pesticides, herbicides, heavy metals, radiation, and other contaminants.

no Activated Charcoal: The Natural Way to Detox and Slow Down Aging
Scroll to top