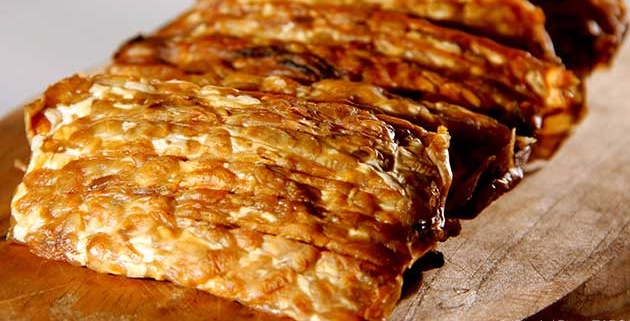 However, vegetarian or not, it can be a nutritious addition to your diet.

High in protein, probiotics and a wide array of vitamins and minerals, tempeh is a versatile ingredient that comes with a variety of health benefits.

This article will take a deeper look at the many advantages of tempeh.

Tempeh is a traditional Indonesian food made from soybeans that have been fermented, or broken down by microorganisms.

Following fermentation, the soybeans are pressed into a compact cake that is commonly consumed as a vegetarian source of protein.

In addition to soybeans, tempeh may also be made from other bean varieties, wheat or a mixture of soybeans and wheat (1).

Tempeh has a dry and firm but chewy texture and a slightly nutty taste. It can be steamed, sautéed or baked and is often marinated to add more flavor.

Much like other meatless sources of protein, such as tofu and seitan, tempeh is a popular choice among vegans and vegetarians because it’s packed with nutrients.

Summary: Tempeh is typically made up of fermented soybeans and/or wheat. It can be prepared in a variety of different ways and is high in nutrients, making it a popular vegetarian source of protein.

Tempeh Is Rich in Many Nutrients

Tempeh boasts an impressive nutrient profile. It is high in protein, vitamins and minerals but low in sodium and carbs.

A 3-ounce (84-gram) serving of tempeh contains these nutrients (2):

Because it is more compact than other soy products, tempeh provides more protein than some other vegetarian alternatives.

Tempeh is also a good dairy-free source of calcium. One cup (166 grams) of tempeh contains about 2/3 of the calcium found in one cup of whole milk (2, 4).

Summary: Tempeh is a good source of protein, iron, manganese, phosphorus, magnesium and calcium. It is also low in carbs and sodium.

Fermentation is a process that involves the breaking down of sugars by bacteria and yeast (5).

Through fermentation, the phytic acid found in soybeans is broken down, helping to improve digestion and absorption (6).

Additionally, fermented foods are a good source of probiotics, which are beneficial bacteria found in your gut that can help promote digestive health (7).

Compared to other tempeh varieties, soy-based tempeh is especially rich in probiotics.

A 2013 test-tube study found that soy tempeh was more effective than bean-based tempeh in stimulating the growth of Bifidobacterium, a beneficial strain of bacteria (8).

Studies have found that probiotics could alleviate the symptoms of irritable bowel syndrome, prevent diarrhea, reduce bloating and support regularity (9, 10, 11).

Some studies have even found that probiotics could increase weight loss.

One study supplemented 210 adults who had large amounts of belly fat with probiotics. Following the 12-week study, participants lost an average of 8.5% of their belly fat (12).

Probiotics have also been associated with improvements in immunity, mental health and even blood cholesterol levels (13, 14, 15).

It’s High in Protein to Keep You Full

Some studies suggest that a protein-rich diet may stimulate thermogenesis, leading to an increase in metabolism and helping your body burn more calories after each meal (16).

A diet high in protein can also aid in appetite control by increasing fullness and decreasing hunger (17).

Additionally, research shows that soy protein can be just as effective as meat-based protein when it comes to appetite control.

In a 2014 study, 20 obese men were placed on a high-protein diet that included either soy-based or meat-based protein.

After two weeks, they found that both diets led to weight loss, a decrease in hunger and an increase in fullness with no significant difference between the two protein sources (19).

It May Reduce Cholesterol Levels

Tempeh is traditionally made from soybeans, which contain natural plant compounds called isoflavones.

Soy isoflavones have been associated with reduced cholesterol levels.

One review looked at 11 studies and found that soy isoflavones were able to significantly decrease both total and LDL cholesterol (20).

Another study looked at the effects of soy protein on cholesterol levels and triglycerides. 42 participants were fed a diet containing either soy protein or animal protein over a six-week period.

Though most available research focuses on the effects of soy isoflavones and soy protein on blood cholesterol, one study did focus specifically on tempeh.

A 2013 animal study examined the effects of nutrient-enriched soybean tempeh on mice with liver damage.

It found that tempeh had a protective effect on the liver and was able to reverse damage to liver cells. Additionally, tempeh caused a decrease in both cholesterol and triglyceride levels (22).

Summary: Tempeh is made from soybeans, which contain soy isoflavones. Studies show that soy isoflavones and soy protein may decrease blood cholesterol levels.

It Could Decrease Oxidative Stress

Antioxidants work by neutralizing free radicals, atoms that are highly unstable and can contribute to the development of chronic disease.

The accumulation of harmful free radicals has been linked to many diseases, including diabetes, heart disease and cancer (24).

Numerous studies have shown that isoflavones could reduce markers of oxidative stress by increasing antioxidant activity in the body (25, 26).

Other studies have found that supplementing with soy isoflavones may have a favorable effect on several diseases associated with oxidative stress.

Another study used data from 6,000 households in Japan and found that intake of soy products was associated with a decreased risk of death from heart disease and stomach cancer (28).

Tempeh may especially be beneficial compared to other soy products.

Summary: Soy isoflavones may possess antioxidant properties and could be beneficial in decreasing oxidative stress and chronic disease.

It Can Promote Bone Health

Tempeh is a good source of calcium, a mineral that is responsible for keeping bones strong and dense.

Adequate calcium intake may prevent the development of osteoporosis, a condition that is associated with bone loss and porous bones (30).

Other studies show that increasing calcium intake could help increase bone growth and density in children and teenagers (33, 34).

Though dairy products are the most common sources of calcium, studies show that the calcium in tempeh is as well absorbed as the calcium in milk, making it an excellent option for increasing calcium intake (35).

Summary: Tempeh is high in calcium and may help increase bone density and prevent bone loss.

Tempeh May Not Be for Everyone

Tempeh, along with other fermented soy products, is generally considered to be safe for most people.

However, some individuals may want to consider limiting their intake of tempeh.

Those with a soy allergy should avoid tempeh altogether.

Eating tempeh may trigger an allergic response for those allergic to soy, which could include symptoms like hives, swelling or difficulty breathing.

Additionally, soybeans are considered a goitrogen, a substance that can interfere with thyroid function.

Summary: Individuals who have a soy allergy should avoid tempeh, while those with impaired thyroid function may want to limit their intake.

How to Use Tempeh

Both versatile and nutritious, tempeh is easy to incorporate into your diet.

Tempeh is typically marinated or seasoned to increase flavor, then crumbled, baked, steamed or sautéed and added to dishes.

It can be used in everything from sandwiches to stir-fries.

Here are a few other delicious ways to use tempeh:

Summary: Tempeh is usually marinated or seasoned and then crumbled, baked, steamed or sautéed. It can be used in a wide variety of dishes.

Tempeh is a nutrient-dense soy product with a high amount of protein, as well as various vitamins and minerals.

It may decrease cholesterol levels, oxidative stress and appetite while improving bone health.

Nevertheless, those with a soy allergy or impaired thyroid function should limit their intake of tempeh and other soy-based products.

Yet for most, tempeh is a versatile and nutritious food that can be an excellent addition to the diet.

no What Is Citric Acid, and Is It Bad for You?
Scroll to top