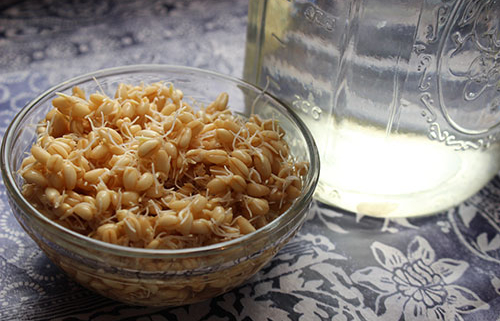 Rejuvelac is a cultured probiotic-rich drink made by fermenting freshly sprouted grains in water. It first became popular in the 1960’s under the influence of living food enthusiast Dr. Ann Wigmore, the original founder of the Hippocrates Health Institute.

Born in Lithuania, “Dr. Ann”, as she was called, is believed to have acquired the recipe from her Baltic origins. The beverage is closely related to the traditional Romanian drink, called Bors, a fermented wheat bran used to make a sour soup called ciorba.

Many people since then have been using this slightly tart, lemony-tasting liquid as a digestive-type tonic for its high enzyme content.

Small shot glass size portions are known to be helpful as a natural gentle laxative which can assist in relieving constipation and potential toxic buildup.

It is extremely beneficial to include some kind of fermented foods in the diet on a regular basis. We like to change it up with variety and rejuvelac is a simple, easy to make alternative to other cultured food and drink that doesn’t require special techniques, culture starters or equipment.

Although you wouldn’t think that water sitting around for a couple of days with sprouted grains in it would taste all that great, the fermentation process actually produces a very clean tasting, tangy drink with a citrus-like aroma.

The active enzymes in the cultured water are largely a byproduct of the grain sprouting process.  Like the name implies, rejuvelac is “rejuvenating” and is a “super sprout drink”, made from these concentrated energizing compounds.

The potent and minutely fizzy strained liquid that results, we have found to be a health-enhancing potion that is mainly beneficial when consumed before or between meals on an empty stomach.

It should really be considered a digestive tonic rather than a beverage you would drink in larger quantities.  We usually drink between 2-4 ounces at a time in shot glass size glasses, as drinking too much may cause gastrointestinal upset and/or loose stools. If you are new to drinking it, definitely start out with a 1oz portion and build up to more over a period of time.

What is Rejuvelac Exactly?

It is essentially the fermentation of sprouted grains in pure water for a 1-2 day duration. Although original methods actually just soaked the grains in water before making it, these days most all recipes sprout them slightly first. The idea is that the grain is plump and basically preparing to reproduce itself. A process which activates compounds necessary for the ferment.

It is traditionally made from wheat berries, but can also be produced from other varieties like rye, kamut, barley, millet, buckwheat or quinoa, with each having their own special bouquet of flavors.

It is one of those fermented foods that can’t usually be purchased from the health food store, but must be created homemade-style.

Rejuvelac is a bit different than other ferments in that you are not using a specific culture starter, like you would when making kombucha, kefir, sauerkraut, miso and tempeh. It is considered a “wild fermentation” because the beneficial microorganisms needed to successfully culture the water are naturally present on the grains and sprouts themselves.

As we mentioned, the process of fermenting the sprouted grains in water encourages high enzymatic activity but also, as a lactic acid ferment, supports the production of beneficial Lactobacillus bacteria. When consumed, these friendly microbes can further proliferate the gastrointestinal tract and help to balance our gut microbiota.

Rejuvelac is a simple and “old school” culturing technique that is very inexpensive to make. It is sometimes used as a liquid culture starter for other fermented foods, like nut or seed cheeses.

Dr. Wigmore, who also popularized “seed cheese” made with sunflower and pumpkin seeds, used small amounts of rejuvelac to culture her raw seed-based cheeses to produce a cheese-like flavor.

Unlike other cultured foods such as kombucha and kefir, which may contain small amounts of alcohol as a byproduct of fermentation, rejuvelac is considered a non-alcoholic liquid, containing only very minute amounts, nothing more than you would find in a jar of sauerkraut.

For those of you who wish to avoid gluten products or ferments, rejuvelac can also be made from gluten-free grains like quinoa and millet. We have included our quinoa recipe further below on this page. 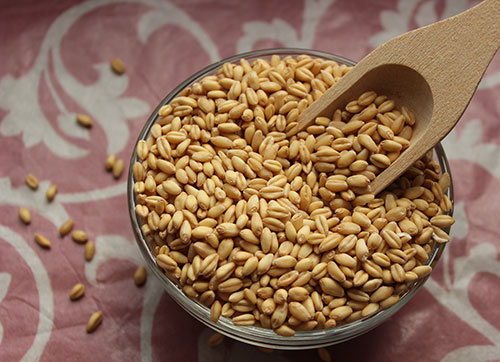 What are Sprouted Grains?

All raw grains, seeds and most nuts will sprout little roots when given the water needed to do so. Soaking them overnight is the best way to ensure that they will sprout or grow little white root-hairs from the end of the seeds.  This helps activate the lacto-fermentation process required to make rejuvelac.

In the words of Sandor Katz, “When you soak the grain, it begins to swell, setting in motion a series of changes that, given the right conditions, will result in its sprouting into a new plant. At the same time, water also revives the bacteria and fungi that populate the grain’s surfaces, and initiates fermentation.”

Rejuvelac is much easier to make of course, if you are familiar with the seed sprouting process. Many grains and seeds are “sprouted” when growing sprouts, microgreens as well as when making essene bread, sprouted rye crackers or rejuvelac. Sprouting is not all that complicated, but it does take some practice, mostly just keeping up with rinsing and making sure you don’t sprout them too long.

The same method is also used to sprout wheat berries for tray-growing wheatgrass.  Dr. Ann Wigmore was also one of the first to discover the healing properties of wheatgrass juice, which she used medicinally, along with rejuvelac, with great success in her holistic health care practice. 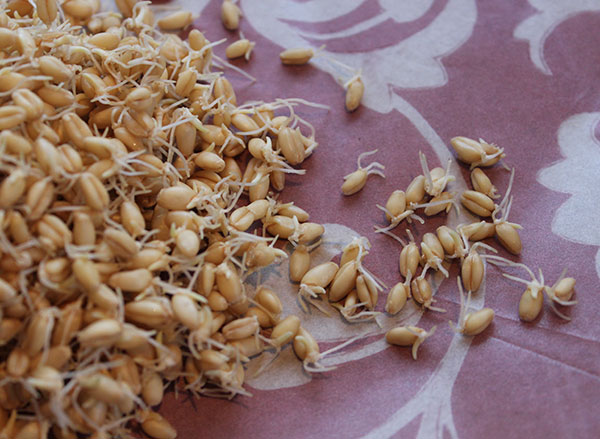 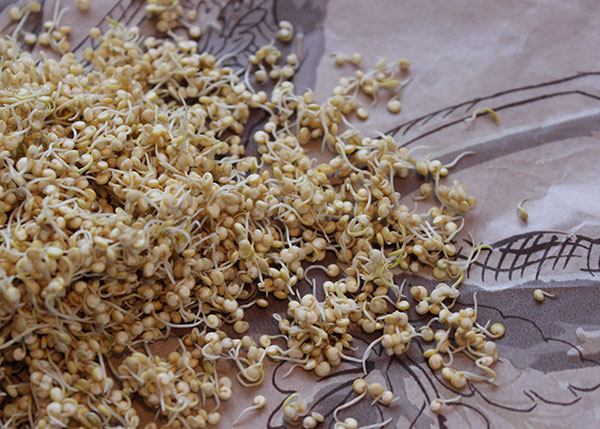 How to Sprout Grains

Sprouting the grain first before fermentation, while not completely necessary, is highly recommend it as it will only boost beneficial components. The sprouting process will take a few days of preparation before you make your actual recipe, but it is very simple.

First off, you want to use whole, raw, non-GMO and preferably organic grains that have not been heat treated or radiated. Once you have some high-quality grains, in this case either soft wheat berries or quinoa for the two recipes on this page, you are ready to make rejuvelac!

Consuming lacto-fermented foods, like rejuvelac, can be a valuable asset to overall health and helpful for processing potential leftover byproducts of a low-quality enzyme-less diet. Poor dietary choices over a period of time can cause toxic buildup in the body and chronic health issues like bloating, constipation, obesity, fatigue and lowered immune response.

Rejuvelac is very high in enzyme content, which is created from the bacteria and yeasts present, one of which includes the amylase enzyme producing Aspergillus oryzae species, the “koji” culture used to ferment miso.

Sprouted grains themselves are known to have very energizing effects on the body, mostly due to their improved level of these sprout activated enzymes that continue to increase when fermented.

Dr. Johannes Kuhl, a German researcher and author of several books including “Cancer in Check”, wrote this about the benefits of lacto-fermented foods:

“The natural lactic acid and fermentive enzymes which are produced during the fermentation process have a beneficial effect on the metabolism and a curative effect on disease. Lactic acid destroys harmful intestinal bacteria and contributes to the better digestion and assimilation of the nutrients. Fermented foods improve the intestinal tract and provide a proper environment for the body’s own vitamin production within the intestines.”

Rejuvelac is a nutritious and energizing probiotic tonic for inoculating the large intestine with friendly Lactobacillus microflora and encouraging the healthy proliferation of good bacteria. It is helpful to consume probiotic supplements and/or fermented foods for this reason on a regular basis and this sprouted wheat berry-based drink is an easy to make inexpensive option.

A healthy balance of intestinal microorganisms should include approximately 80% bacterial group-based species, like Lactobacillus and Bifidobacterium, and 20% of the more acidic fungal group species such as Candida albicans, which are actually beneficial in small amounts. (Source)

Yes, during the process of fermentation, rejuvelac can spoil and produce an inedible liquid, which means that other unfriendly microbes have taking over the ferment and have dominated the lacto-bacteria present. This is usually obvious by the presence of a very strong, unpleasant putrid odor. It will also look overly cloudy with possible mold growing on the surface.

You will need to discard it and begin again with clean sanitized equipment. Spoilage often occurs when the atmospheric conditions were either too hot, too humid or both. Ideally a 70-75°F (21-24°C) temperature is best for optimal results.

There are some health authorities, like Brian Clement, who warn against the use of rejuvelac because there may be a likelihood of what is labeled as “contamination” in the final product. Not the lethal variety, but other more fungal yeasts, like Saccharomyces, which may be present in small amounts in the cultured liquid.

However, we have found that this is not an unusual phenomenon, as other fermented foods are also known to contain them in small quantities. These types of yeast are found in other ferments, like kefir, and are beneficial in lower volumes (about 20%) as they are in our intestines.

The Lactobacillus species are hardy strains of microbes and are what is needed to create a successfully fermented product, without them you would not achieve a lacto-fermented end result.

We personally have only experienced positive effects from drinking rejuvelac and feel that we wouldn’t have such associated health benefits if other less beneficial species were present in large quantities. Also, if the final liquid outcome looks and tastes pleasant, like it should, these are good signs of a lactic acid bacteria-rich fermented drink.

It is a good idea, as suggested, to take precautions when preparing it, making sure all your equipment is thoroughly clean and sanitary to avoid spoilage. In addition, to prevent possible airborne yeast contaminants, it is advised to place a loose lid and clean cloth securely over your jar and culture it in a ventilated, yet clean environment away from dust and foot traffic. We have also successfully used airlock fermentation caps, which is also another option

Rejuvelac does agree with most people, but not everyone, so it is good to start out slow with small amounts (2T) to test it out if you are prone to digestive sensitivities.

Drink rejuvelac first thing in the morning as well as before or between meals for optimal results.  Again, it is best consumed in smaller quantities rather than large glasses, especially if you are new to drinking it.

Kratom is illegal in Thailand since 1943

noCharcoal To Improve Your Life!
Scroll to top